In light of Sony retiring the Walkman Cassette player today, I thought it would be neat to put together a Infographic representing some of the history of audio recording formats. In my generation, vinyl records and cassette tapes were the norm although I remember my Father’s love of his reel-to-reel. However there is much more history beyond that… and how far we come! 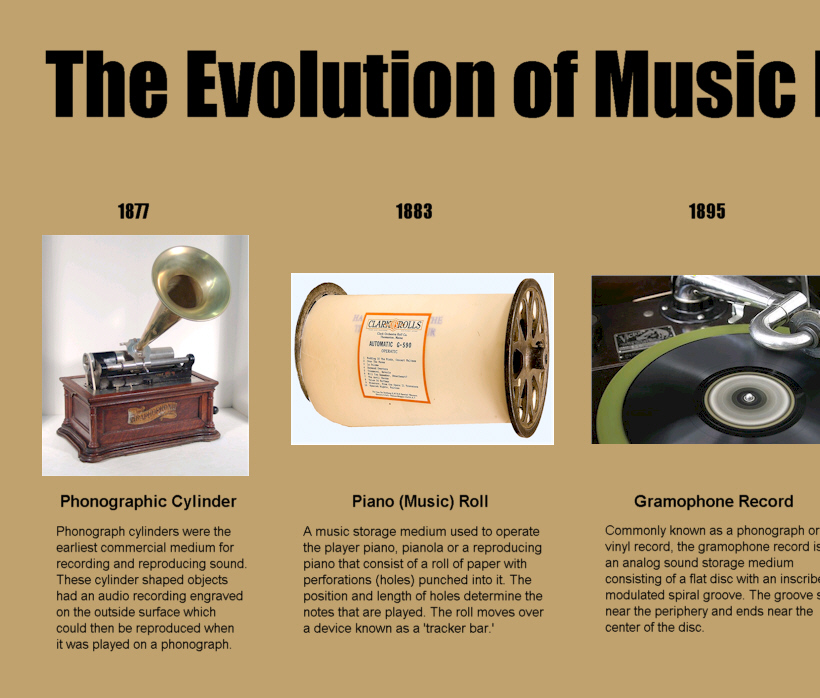 Phonograph cylinders were the earliest commercial medium for recording and reproducing sound. These cylinder shaped objects had an audio recording engraved on the outside surface which could be reproduced when the cylinder was played on a mechanical phonograph.

A piano roll is the music storage medium used to operate the player piano, pianola or a reproducing piano which consists of a roll of paper with perforations (holes) punched in it. The position and length of the perforation determines the note played on the piano. The roll moves over a device known as the ‘tracker bar.’

Commonly known as a phonograph or vinyl record, the gramophone record is an analog sound storage medium consisting of a flat disc with an inscribed, modulated spiral groove. The groove starts near the periphery and ends near the center of the disc.

A form of magnetic tape audio recording in which is held on a reel which is then mounted on a spindle. The end of the tape is pulled out of the reel, threaded through mechanical guides and a tape head assembly, and attached by friction to the hub of a second empty takeup reel.

The Muntz Stereo-Pak, commonly known as the 4-track cartridge, is a magnetic tape sound recording cartridge technology. The in-car tape player that played the Stereo-Pak cartridges was called the Autostereo, but it was generally marketed under the common Stereo-Pak trade name.

The Compact Cassette, often referred to as audio cassette or cassette tape, is a magnetic tape sound recording format originally designed for dictation, but eventually supplanted the Stereo 8 track and reel-to-reel tape in most non-professional applications.

Stereo 8, commonly known as the eight-track cartridge, is a magnetic tape sound recording technology that was popular in the U.S. from the mid-1960s through the late 1970s, but was relatively unknown in many European countries.

A Compact Disc (also known as a CD) is an optical disc used to store digital data. It was originally developed to store sound recordings exclusively, but later it also allowed the preservation of other types of data.

MPEG-1 or MPEG-2 Audio Layer 3, a.k.a. MP3, is a digital audio encoding format using a form of lossy data compression. It is a common audio format for consumer audio storage, as well as a de facto standard of digital audio compression for the transfer and playback of music on digital audio players.

DVD, also known as Digital Video Disc or Digital Versatile Disc, is an optical disc storage media format, and was invented and developed by Philips, Sony, Toshiba, and Time Warner. Its main uses are video storage and is capable of storing just under seven times as much data as the CD.

Blu-ray Disc is an optical disc storage medium designed to supersede the DVD format. The format defines as its standard physical media a 12 cm (same as DVDs and CDs), 25 GB per-layer optical disc, being dual layer discs (50 GB) the norm for feature-length video discs, and the addition of more layers left open as a future possibility.