It is with sadness that I announce that our dog, Jody, passed away yesterday. She was about 10 – 11 years old as we are not sure of her birth date, only her adoption date.

Jody met her fate after getting into some rat poison which she mistook for something to chew on. The vet tried to save her with injections of Vitamin K but is was too late. And while she lived a very good life for the 8 or so years we had her, I’m very sad it had to be shortened in this manner. 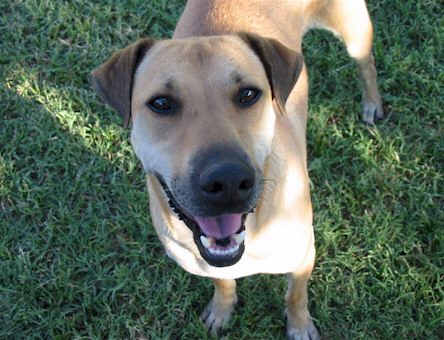 The first time I met Jody, she was a little over a year old and belonged to one of our friends. I thought she was a most beautiful canine but was frustrated that she would never let me near her due to the fact that she had obviously experienced some abuse when she was a puppy. I’d get to just about an arm’s length of her when she dart off in fear.

I was surprised one day when my wife came home and Jody was with her. We already knew that our friend was moving to another state and could no longer care for Jody so my initial response was, “What is that dog doing here?” You see, I didn’t want another dog as we had had some bad experiences with the last one. I barked, “That dog is not living here. No way, no how!” Some eight years later, she’s still here, at least until yesterday.

Once Jody came to live with us, her initial fear of me (and every male for that matter) quickly subsided and I became her best friend. That was a natural occurrence most likely due to the fact that I’m the one that fed her, spent the most time with her, walked her, pet her, occasionally bathed her (she was an outside dog), in essence loved her. Sure the rest of the family gave her attention as well but I was her favorite.

I recall how every time I came home after being out of town how excited Jody was to see me. In all honesty, that occurred every day when I’d first see her in the morning however when I was gone for any length of time, she was always especially excited to see me. She loved to go on walks as well, so much so that at times when I didn’t want to walk her, she’d dart out the gate and go on one by herself. She always come back though because she loved her home.

When we were building our swimming pool, I took Jody to a friend’s house three miles away so she could stay in his back yard while the contractors where applying the cool deck surface. A couple hours later, I’m in my back yard and hear this barking coming from the front of the house. It’s Jody. She had dug a hole under my friend’s gate and found her way home. That’s how much she loved her home.

Even though I initially I was reluctant to the idea of ever owning another dog, Jody turned out to be one of the best dogs we ever had. She had a very sweet and gentle way about her and yet her bark would scare off anyone that was not supposed to be in “her” back yard. She never chewed on anything that she wasn’t supposed to like furniture, clothes left outside, etc. She was never “over desirous” of affection as many dogs are (one thing I hate about dogs) – a simple pat on the head or a stroke of the coat would do.

We will miss our Jody. She was a great pet and if all dogs do go to heaven, she will certainly have a special place there. I wish we could have had a few more years with her but thank you Jody for 8 great years. May you now rest in peace.